What is Sound Insulation Testing? Airborne and Impact 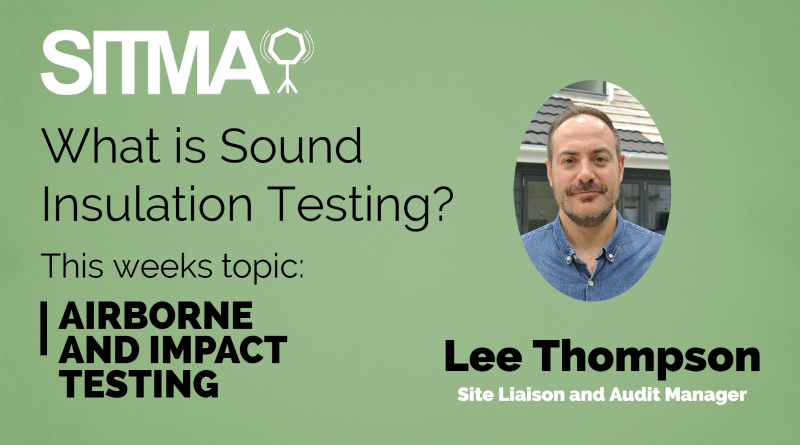 In our new 5 part series, Lee Thompson goes through the details of SITMA, Sound Insulation Testing and what to do if a test fails. In our third part, Lee discusses what airborne and impact testing

What is an Airborne Test?

An airborne test is used to replicate audible airborne noise such as TV’s, music, human voices etc that could be transmitted from one dwelling to another.

The test is conducted by placing a large speaker in the larger room of the separating rooms (for repeatability purposes) this is called the ‘Source Room’.  The speaker will generate pink or white noise at a very high level (typically around 95-110dB). The tester will record this in the room over 30 seconds (they can do this over a minimum of 5 standing/static positions or by ‘sweeping’) with a class 1 Sound Level Meter, this is a specialised/expensive piece of equipment.

The test is completed, and the result is a presented with singular number which is calculated using 16 different frequency bands in the 3rd Octave (human hearing frequency band).

Scotland Building Regulations does not require the +Ctr correction, and has the target of 56dB DnT,w  for new-build construction and 54dB DnT,w for change of use construction.

The number given isn’t directly correlated to the amount of noise a human ear would hear due to some complicated mathematics.

What is an Impact Floor Test?

This test measures the impact noise from a room above to measure the level of movement noise above, such as footfall and general banging / knocking noises. This test is only carried out where one dwelling (or a portion thereof) is directly above another.

An Impact test is carried out using a Class 1 Sound Level Meter and an Impact Machine (also known as a Tapper machine). The test is carried out between two habitable rooms (typically living rooms and bedrooms) of a separating party floor of flats / apartments / hotel rooms / HMO’s / care homes.

The Impact machine is usually rectangular in shape and approximately 50-80cm in length, 25cm-35cm in width and depth) it will sit on 3 legs that levitate the Impact Machine 40mm from the floor surface.  6 500g steel hammers will drop from the machine to make direct contact with the floor surface at a rate of 6 strikes per second. The machine is place in 4 positions in the room above (the source room). The Sound Level Meter is taken into the room below (the receive room) and measurements are taken over a minimum of 30 seconds (a minimum of 6 measurements in a static position or using the ‘sweeping’ method) (1-2 measurements per impact machine position).  As per the Airborne test, a background measurement (s) is taken in the receive room and the reverberation measurements are taken to complete the test.

The test is completed, and the result is a presented with singular number which is calculated using 16 different frequency bands in the 3rd Octave (human hearing frequency band). 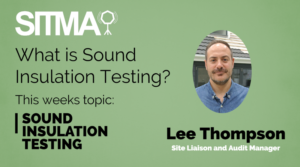 What is Sound Insulation Testing?

In our new 5 part series, Lee Thompson goes through the details of SITMA, Sound Insulation Testing and what to 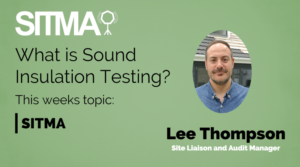 What is Sound Insulation Testing? – SITMA

In our new 5 part series, Lee Thompson goes through the details of SITMA, Sound Insulation Testing and what to 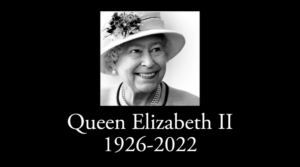